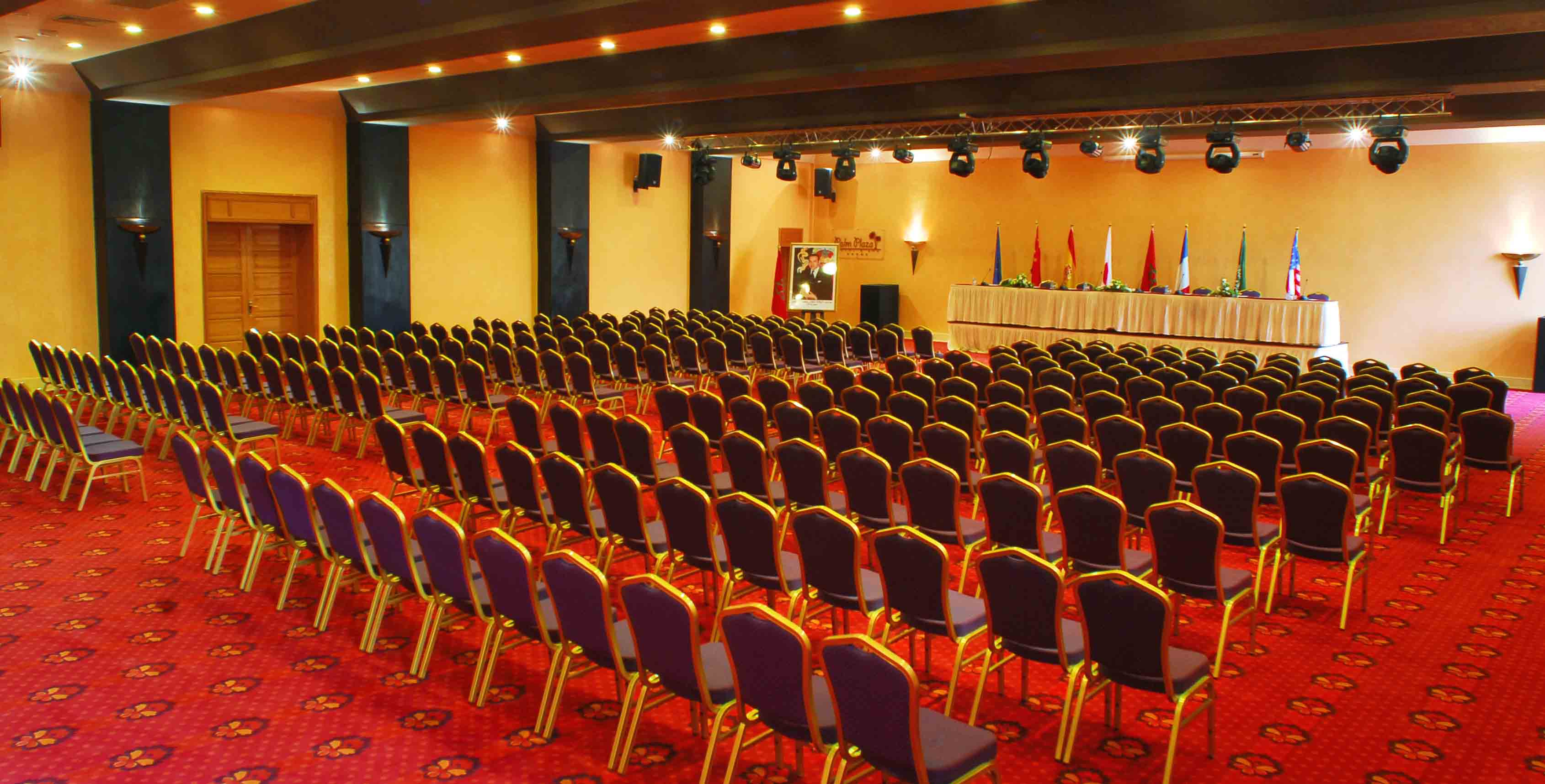 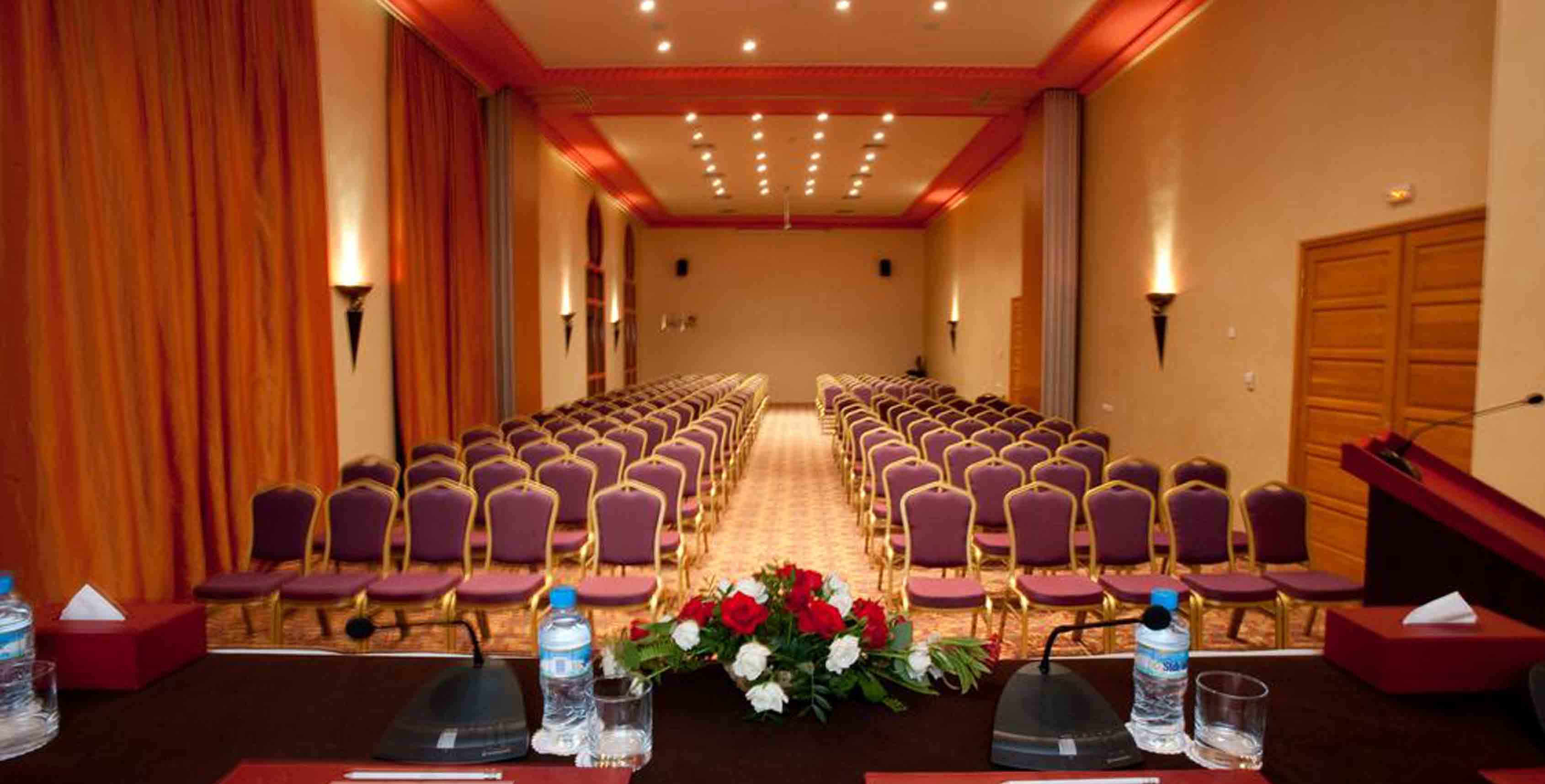 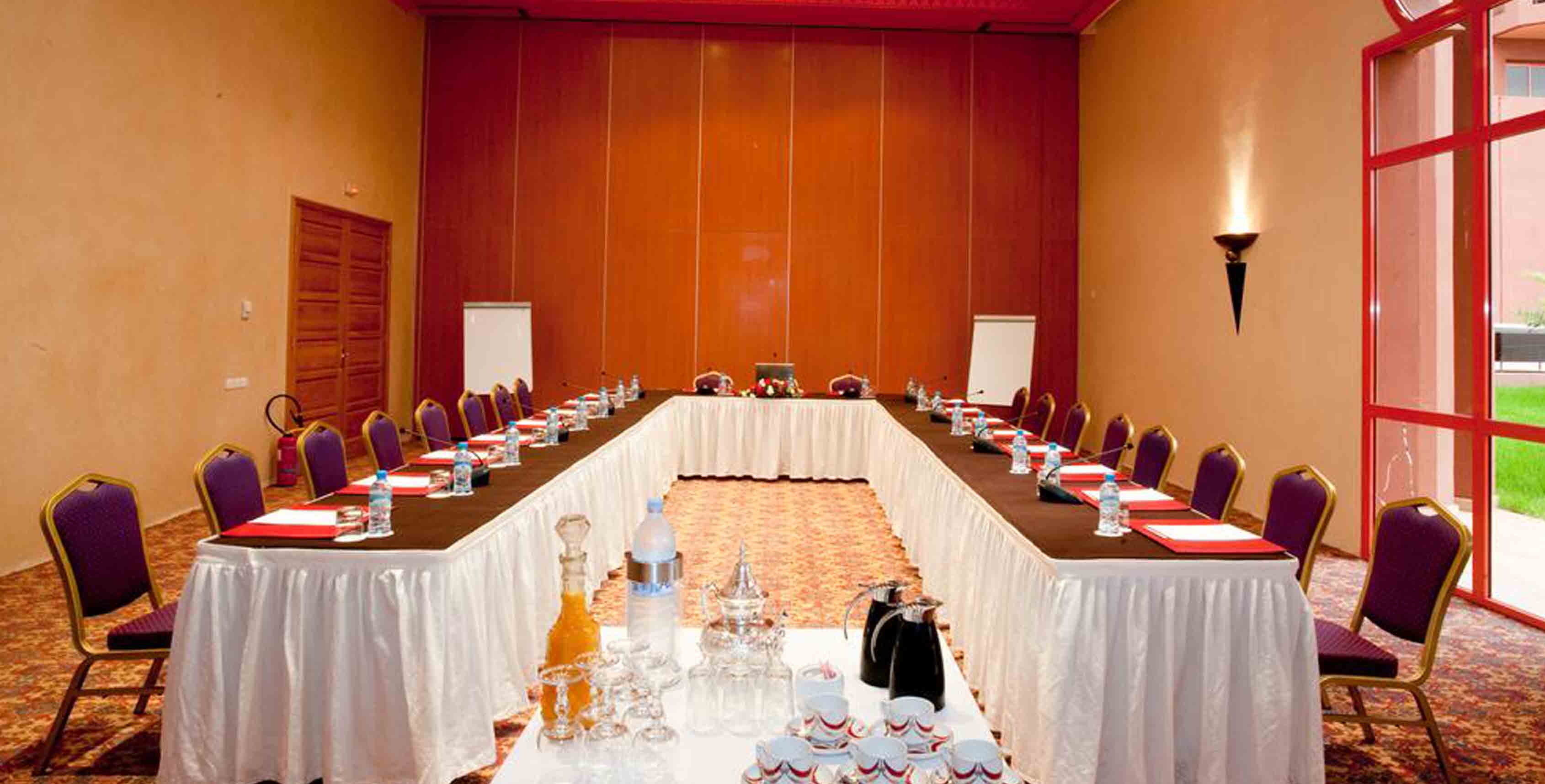 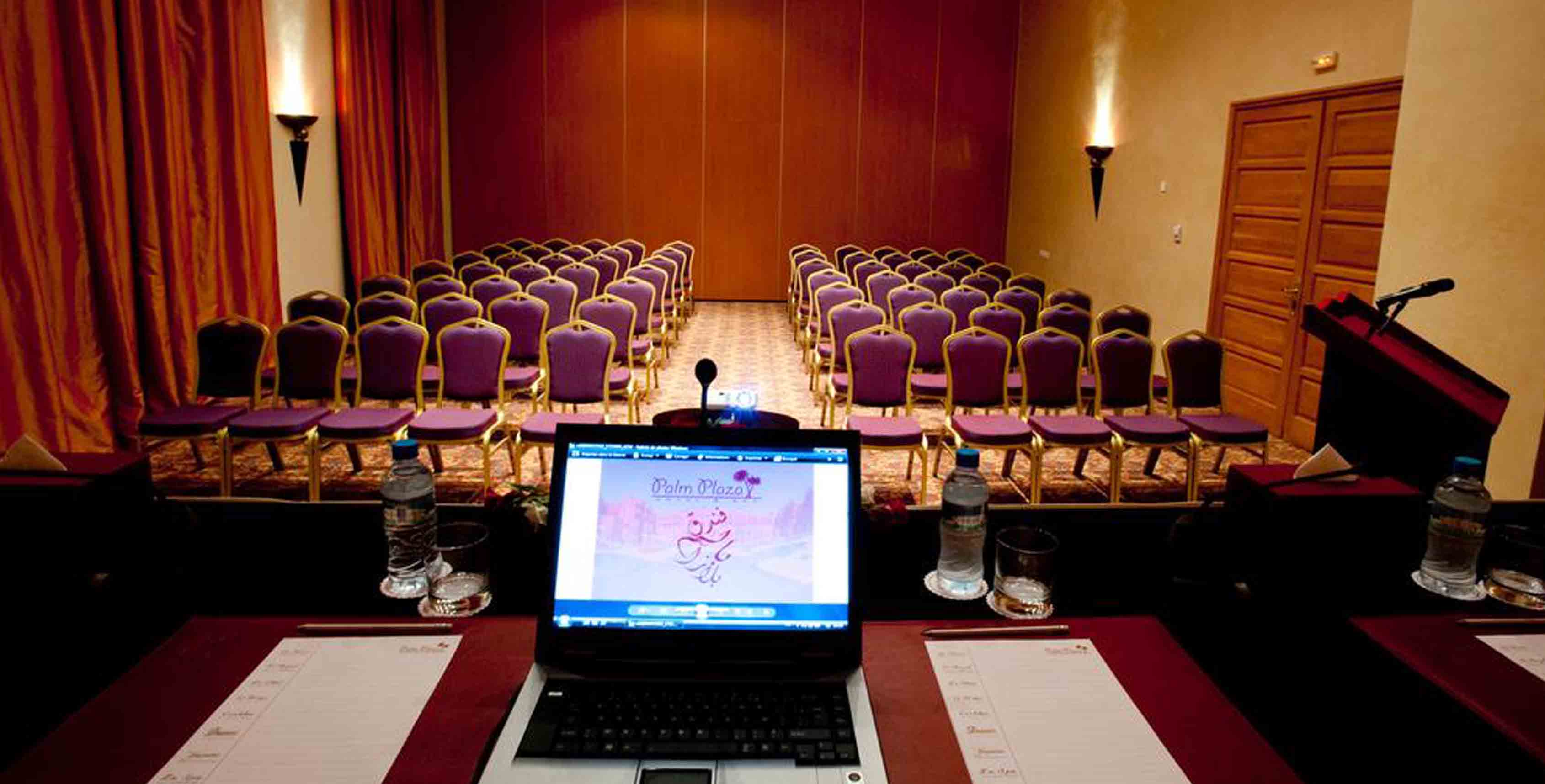 Hôtel Palm Plaza Marrakech The conference will be held in Palm Plazza Hotel, Located in the heart of the Agdal district just minutes from the city center and the main attractions of the ocher city.

Marrakech, known as the pearl of the south or the ochre city, Marrakesh is situated at the foot of the Atlas Mountains. The city was founded in 1062 by Youssef Ibn Tachfin, first king of the Almoravides dyanasty. Many centuries ago, Morocco used to be named Marrakesh in the Middle East. It is the fourth biggest city in Morocco after Casablanca, Rabat, and Fes.

Marrakech is the most visited city in Morocco, and it’s ranked 6th best destination in the world by “TripAdvisor”. Founded almost 1,000 years ago, international Marrakesh surprises by its creative energy. The ramparts, gardens, mosques and Kasbahs, Djemaa El Fna square and Moroccans palaces of the imperial city's golden age are now the backdrop for cultural, sporting, artistic and economic fervor. Marrakesh: is a major city in the northwest African nation of Morocco. It is the fourth largest city in the country after Casablanca, Rabat and Fes, and is the capital of the mid-southwestern region of Marrakesh-Tensift-El Haouz. Located to the north of the foothills of the snow-capped Atlas Mountains.

There are plenty of things to do and see in this vibrant city, and once you’ve captured its charms, it would be impossible to forget them. Here are some of the main attractions in Marrakech:

Located in the medina, Jemaa el Fna is one of the busiest squares in Morrocco and maybe the entire Africa. Jam packed with various acrobats, dancers, musicians, snake charmers and all sorts of performers, the square is one of the most famous sights in town. Throughout the day, Jemaa el Fna is lined up with cafes, carts selling freshly squeezed orange juice and people enjoying the street shows in this flamboyant ambiance. Once the sun goes down, Jemaah el Fna Square becomes even livelier. The orange juice stands are quickly replaced by various food stalls selling fresh delicious dishes. Therefore, if you really want to see how Marrakech’s heart beats, don’t hesitate to experience the Jemaa el Fna Square with its charming vibrant scene. 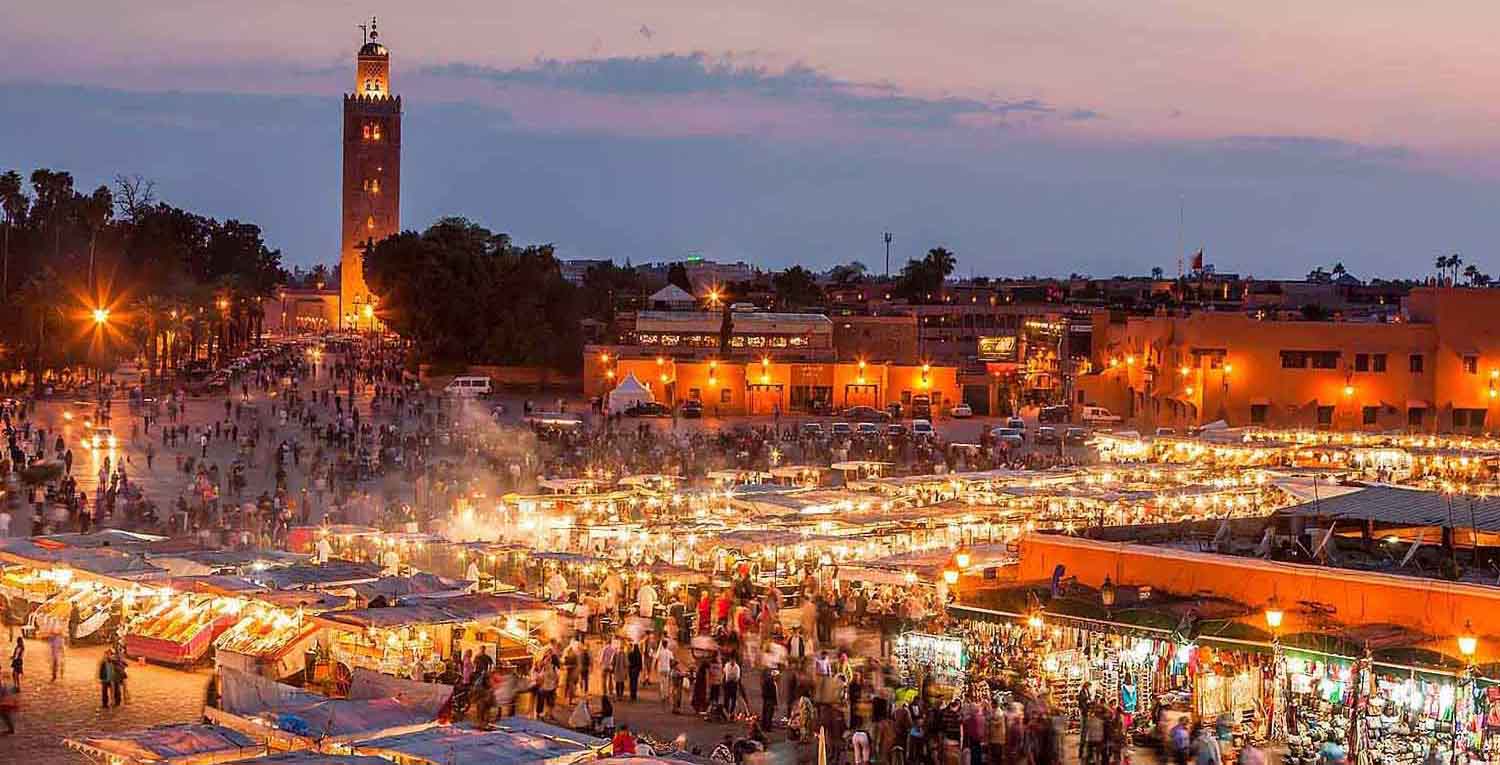 Filled with rare plants, exotic trees and flowers, bright colors, quaint bridges, winding alleys, beautiful fountains, various species of birds and a quiet relaxing atmosphere, the Majorelle Garden is a must see attraction in Marrakech. Home of the French painter Jacques Majorelle, the property has been opened to visitors in 1947, but right after the artist’s death, the getaway started to degrade. Its lost charm has been recovered only in 1980 when Pierre Berge together with the renowned designer, Yves Saint Laurent, have started the restoration. Today, the Majorelle Garden is also home of the Islamic Art Museum, sheltering an impressive collection of ancient artifacts including jewelry, porcelains, textiles, weapons, carpets and many valuable items. Additionally, visitors at the museum will be delighted with some of Jacques Majorelle’s art works.

Marrakech is divided in two different sides: the modern city called Gueliz or simply Marrakech, and The Medina – the old historic center enclosed by 16 km of ramparts and gates. No trip to Marrakech would be complete without a stroll around medina. This maze of narrow streets delights its visitors with numerous monuments, gardens, mosques, traditional riads, souks (traditional North African markets) and museums. Moreover, the spicy sweet flavors, the oriental sounds and the vivid colors here will guide your every step into this wonderful world, filling your senses and urging you to dream.

Other attractions and things to do in Marrakech

These are just a few things to see in Marrakech, but there’s much more on offer in The Red City. Other notable attractions include the Dar Si Said Palace with the Museum of Moroccan Art; the remains of the El Badii Palace; the Ben Youssef Medersa– one of the most impressive buildings in Marrakech; the Saadian Tombs; the remarkable mosques scattered around the city; or the delightful souks in the northern part of medina.

In addition to sightseeing, Marrakesh offers as well, a rich variety of activities including entertaining day trips to the beach of Essaouira or to the lovely Ourika Valley, golf, hiking, relaxing afternoons at one of its excellent spas or hot air ballooning over the nearby countryside.